ARETI is a project by the businessman Igor Makarov which was created as a result of rebranding of ITERA International Group of Companies, which history started in 1992.

ARETI is a private company which consolidates most of the current Group’s projects and seeks to implement new ones.

The name ARETI symbolizes transition of the company to a new stage of development. A new name mirroring the previous one confirms that the main economic areas, the way of doing business, staff, values, and social responsibility remain the same. 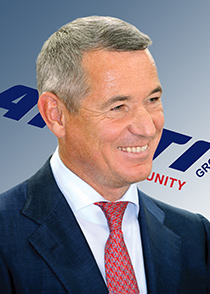 The Group was established in 1992.
Since 1994 the Holding has been engaged in natural gas deliveries.

Today, ARETI IG is composed of subsidiaries and affiliated companies with business interests in Switzerland, the CIS Countries and the Baltic States, United States, Canada, Western Europe and in the Middle East.

ARETI International Group promotes cycling all over the world, by supporting the cycling movement in various countries.

Igor Makarov is the Member of the Management Board of International Cycling Union (UCI).

In addition, I.V. Makarov was the founder and the main sponsor of the professional cycling team «KATUSHA», which successfully performed on the World Tour from 2009 to 2019 and was one of the best teams in the world for several years in a row.

Ashihara-karate is a strength kind of karate which is considered to be an applied sport and is popular among police officers and special task forces.

Later on, the Club was used as a basis to form a national team, which has become one of the strongest in the world. For the time period of 20 years the national team constituted mostly by athletes from Ashihara Karate ARETI took part in 18 Championships and World Cups and was awarded 297 medals (105 – gold, 82 – silver, 110 – bronze).

In the last World Championship in 2014, which took place in Gyor (Hungary), the Russian national team became an absolute winner, taking back the title of World Champion (in 2013 Russia was World Vice-Champion).

World Championship was not held in 2015. Nevertheless, the Russian national team successfully participated in some World Cups and was awarded 25 gold, 16 silver, and 15 bronze medals.

Among them participation in the project «Books for Cecutient Children», organization of New-Year's celebrations and circus events for children from orphan asylums, help for veterans of war and labor, participation in reburial of remains of soldiers killed during the Great Patriotic War, support for veterans of sport, reconstruction and construction of Orthodox Churches, cooperation with different charity funds, etc.

Main
Our Advantages
About the Company
Social Responsibility
Contacts